Techex, Sky and The FA partner to deliver England team IPTV for Brazil 2014 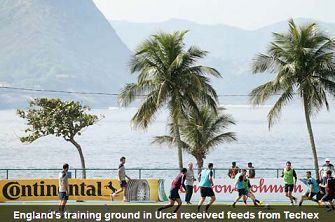 In a joint project on behalf of The FA, Sky deployed a Techex system to provide both off-air live TV and HD event feeds to the Royal Tulip Hotel in Rio, home of the England team during the World Cup, and to the England training ground. The system allowed England players and staff to view live games and other relevant content such as news from their hotel rooms.

As the incumbent provider of IP-based monitoring and IPTV services to Sky, Techex was a natural choice to help with the unique challenge of delivering live services to the England team during the World Cup event.

Techex designed an IP-based system to receive a range of feeds from satellite and HD-SDI at Sky’s facility in the UK and robustly transmit them to the remote network in Brazil. The feeds were then redistributed locally to set-top boxes over a newly installed IP network at the hotel using Techex IPTV middleware. The remote equipment occupied very little space and was managed and monitored from the UK.

Gordon Roxburgh, Technical Manager, Sky Sports, commented: “We chose to work with Techex as they were able to provide a reliable yet innovative solution, pushing as many as 10 simultaneous channels including multiple HD services down a constrained pipe, and delivering to very tight deadlines”.

Richard Bailey, Technical Director, Techex said: “As a long standing supplier to BSkyB, we are delighted to have had the opportunity to work on this unique and interesting project.”

Techex’s core business is assisting its partners to benefit from the advantages brought about by IP transmission. It has unrivalled experience in implementing IP based solutions and has built up an impressive list of clients including BSkyB, BBC, Arqiva, Globecast, Disney and Discovery.

Sky is the UK and Ireland’s leading home entertainment and communications company. Around 40% of all homes have a direct relationship with Sky through its range of TV, broadband and home telephony services.

Sky is the UK’s biggest investor in television content, investing more than £2.5 billion a year in channels such as Sky 1, Sky Atlantic, Sky Living, Sky Arts, Sky Sports, Sky Movies and Sky News. Around two-thirds of Sky’s content spend is invested in the UK and Sky is the fastest-growing source of investment in original British programmes. More than 30 million people watch Sky content each week.

The Football Association was founded in 1863 as the governing body of the game of football in England and is responsible for all regulatory aspects.

The FAs activities include promoting the development of the game amongst all ages, backgrounds and abilities in terms of participation and quality. This also involves promoting the availability of the sport to the greatest possible number of people.